skip to main | skip to sidebar

Happy New Year!
What do these recent covers have in common? Blue! 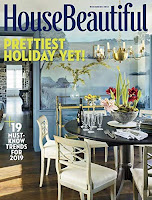 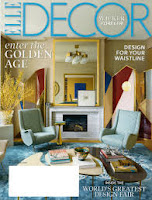 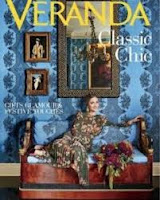 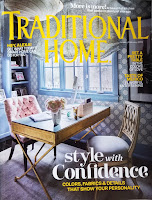 Blue has many lives. It's the Blue Bird of happiness and, as Willie puts it: “Blue skies smilin' at me, nothing but blue skies do I see.” It’s also a color of sadness and the Blues, as well as the color of leadership, such as the blue suits of JFK and the blue and buff uniform designed by George Washington. It is the color of our home. As astronaut Neil Armstrong put it: “It suddenly dawned on me that that tiny pea, pretty and blue, was earth.” 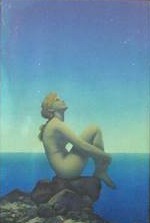 Here’s a bit about me and blue.

I’m a red girl, but I married into blue. A teenage Tom Harter went with his mother to the Weatherford Trade Days and came home with a huge 1920s Maxfield Parrish print, “Stars,” with the famous “Parrish Blue” sky --- or as our son once called it: “You mean the naked blond on the rock?”

A year ago I came home from a hospital visit, opening my eyes to the first sight at home: a blue Bauer bowl that the same Tom Harter brought to me with my breakfast. There, right in front of me, was a Robin Egg’s blue that restored my hope. Made in California in the 1920s, that blue bowl has served our family for 25 years. 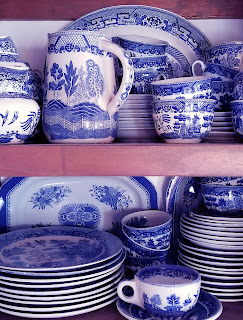 When I was first buying antiques, I fell in love with the Blue Willow pattern. I bought plates in Maine, bowls at Brimfield, cups and saucers in Texas from the tiny store where my friend Kathy Flories started her business. A favorite New York haunt was the restaurant Blue Willow, with, you guessed it, Blue Willow dishes on the tables as well as the walls and ceiling.

We also have the much finer 1950s blue Spode china that my parents received as wedding gifts. We use that on Thanksgiving, but the humble 1920s Blue Willow dishes we use every day. The original story of the Blue Willow pattern is a Romeo-Juliet type tragedy. Today the birds symbolizing the two lovers take flight in our kitchen and bring us joy.

In the 1980s in New York, Yves Klein blue was everywhere – the Blue Dog art, the Blue Man Group and in my wardrobe. From Encore, the resale shop on Madison Ave. with consignments from Jackie O, I bought a neon blue Japanese dress that I may try to squeeze into for the Fort Worth Show on March 1,2,3, 2019. With it I wore blue earrings made from re-purposed slide frames, a gift from my in-laws. It’s possible that I wore this combo to the Palladium –now that dates me! 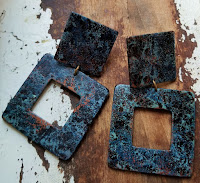 Blue as a color will saturate the Fort Worth Show on March 1,2,3 with examples in almost every booth. That’s because blue is so beloved and has been rendered in so many objects and forms. Over half of the people in the world say that blue is their favorite color, both men and women.

In the ancient world, blue was a latecomer and very expensive to produce. But when indigo dyes first became available in the 1500s, blue was suddenly beloved by everyone, worn by both the nobility in a castle and the workman on the street. We think of the 1600s, 1700s and 1800s as centuries full of brown – actually they were full of blue, the favored color for clothing in all social classes, such as pants, shirts, coats. That’s one of the reasons Levi Strauss had a hit on his hands with the invention of blue jeans in 1873. We all love blue.

In a year that has seen so much contention on the surface, the color blue is one of the things that unites us at a deep level: an unconscious, immediate affinity --- a deep love for the blue sky, baby  blue, the color of harmony.

Here are more blues from our home…

Read more in the blog below about all the Blues coming to the Fort Worth Show of Antiques and Art March 1,2,3, 2019, which will soon be here!
Happy New Year. 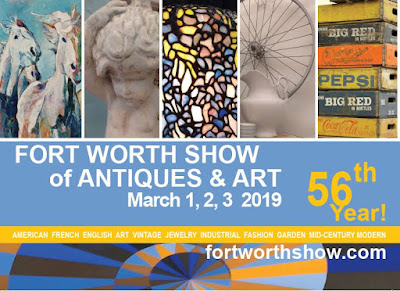 It's east to leave a comment. What do you love about antiques? Hope to see you at the show!

The Mercantile on Camp Bowie Antiques, Fashion, Decor -- Free Fort Worth Show Parking for Carpools of 3. Details at www.fortworthshow.com

150 Top Exhibitors from Across the Nation

1. Free Parking at the Show for carpools of 3 or more sponsored by: The Mercantile on Camp Bowie Blvd.

2. ...Or become a member of the National Cowgirl Museum & Hall of Fame and/or the Fort Worth Museum of Science & History and always park free in the "Museum Lot" near the show.